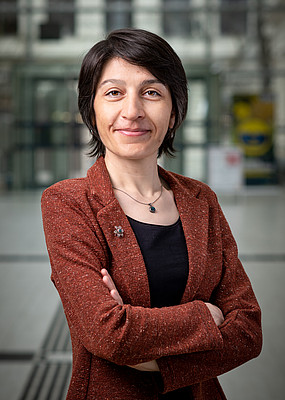 Derya Özkaya is a postdoctoral researcher at the Centre for Southeast European Studies (CSEES) at the University of Graz. She received her Ph.D. in Political Sciences from the Otto Suhr Institute of Political Science at Freie Universität Berlin with her dissertation entitled “The Affective and Emotional Dynamics of Collective Action in Turkey's Gezi Uprisings and Their Aftermath” in November 2020. She is currently working on her first monograph on the political promises and also limitations of collectivization, politicization, and mobilization of emotions and affects in collective (in)action building on ethnographic fieldwork conducted in two cities of Turkey in 2016 and 2017. Her academic research interests are primarily centered on political emotions and affect, political ethnography of collective action and resistance, social movements and contentious politics, and collective memory with a particular focus on Turkey.

Özkaya has also co-authored a book chapter on the methodology of researching affect through interviews in Analyzing Affective Societies: Methods and Methodologies (Routledge, 2019). She has also published a book chapter titled “Negotiating Solidarity and Conflict in and Beyond the Neighbourhood: The Case of Gülsuyu-Gülensu, Istanbul” in the edited volume Urban Neighbourhood Formations: Boundaries, Narrations and Intimacies (Routledge, 2020) drawing on her ethnographic research in one of the working-class neighbourhoods in Istanbul.

Özkaya holds an M.A. in Cultural Studies from Sabancı University, Istanbul, and two bachelor’s degrees in Sociology and Political Sciences from Istanbul Bilgi University. Before joining the CSEES, Özkaya has worked at the Faculty of Arts and Social Sciences (FASS) at Sabancı University as a teaching assistant. Then, she worked at the Centre for Middle Eastern and North African Studies at FU Berlin as a research associate in the research project “Political Participation, Emotion, and Affect in the Context of Socio-Political Transformations” at the collaborative research center Affective Societies funded by the Deutsche Forschungsgemeinschaft (DFG) between October 2015 and September 2018.