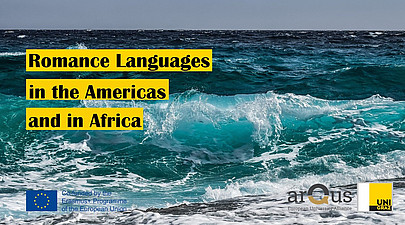 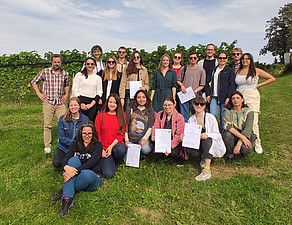 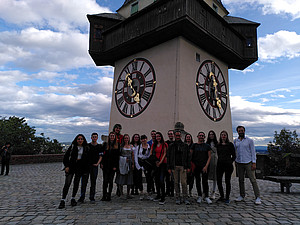 From 19–24 September 2022 the Arqus Summer School in Romance Linguistics “Romance Languages in the Americas and in Africa” was hosted by the University of Graz. Bachelor and Master’s students from the Universities of Granada, Graz, Bergen, Vilnius, Munich and Augsburg successfully attended the classes.

The summer school consisted of three modules, which were laid out according to the principles of a blended intensive programme: a preliminary online module from 1 to 14 September 2022, as well as the general module and the research module, the latter both held at the Department of Romance Studies of the University of Graz from 19 to 24 September 2022.

Renowned experts from the Universities of Utrecht, Santiago de Chile, Graz, Salvador de Bahía, Cádiz, Augsburg, Granada and Bergen taught various classes, e.g., on the morphosyntax of Portuguese and Spanish in Southwestern Africa, sociolinguistics and the lexicon of Spanish in the Caribbean and in Chile, forms of address in Spanish and Portuguese on both continents, and syntactic change in Italo-Romance emigrant varieties in Southern and Northern America in contact with other languages. In a very interactive environment, the students were also made familiar with modern methods in linguistic field work.

Previously, during the online module, the students received an introduction to the overall topic and the historical background of Spanish, Portuguese, and Italian in Africa and in the Americas. In the concluding research module, the students worked in small groups on their own to carry out guided research tasks on specific topics, supervised by the teaching personnel.

Extracurricular activities included a guided walk in the UNESCO World Heritage historic center of Graz and a final excursion to the Styrian countryside.

The summer school was multilingual, and courses were taught in Spanish, Italian and Portuguese, aiming at improving the inter-comprehension skills of the students.

The Summer School is part of the permanent activities by the international network Arqus International Forum on Romance Studies (AIFRS), an academic network within the Arqus University Alliance. A follow up edition will take place in Granada in September 2023.

Soledad Chávez Fajardo: Since obtaining her master’s degree at the Real Academia Española in 2004, Soledad Chávez Fajardo has been an assistant professor for Spanish and Romance languages at the University of Chile (Universidad de Chile). In 2021 she earned her PhD at the Autonomous University of Madrid with a thesis titled El diccionario de chilenismos y de otras voces y locuciones viciosas (1901–1918) de Manuel Antonio Román. She is Académica de Número, correspondiente de la Real Academia Española within the Academia Chilena de la Lengua and a luminary in the field of the Chilean Spanish lexicon.

Roxana Sobrino Triana: A Cuban native, Roxana Sobrino Triana is a specialist on Caribbean Spanish sociolinguistics and geolinguistics. Previously to her current position as assistant professor at the University of Bergen, she worked at the University of Havana as a lecturer (2005–2007) and as a researcher for the Institute of Literature and Linguistics (2005–2013), also forming part of the equipe of the Linguistic Atlas of Cuba (ACuL), where she coordinated the lexical repertoire (2010–2013). Roxana Sobrino obtained her PhD from the University of Bergen in 2017 with a thesis titled Actitudes lingüísticas en el Caribe insular hispánico (results published in Cuba: realidades e imaginarios lingüísticos, Berlin etc. 2021). She is also very engaged in research concerning the linguistic integration of the Spanish speaking community in Norway.

Roberta D’Alessandro: Currently a full professor for linguistics/syntax and language variation at Utrecht University, Roberta D’Alessandro is also principal investigator of the ERC Consolidator project Microcontact. Language variation and change from the Italian heritage perspective, which focuses on Italo-Romance emigrant varieties in the Americas as a laboratory for the investigation of ongoing language change. Roberta D’Alessandro is a leading authority in syntactic variation and linguistic change in language contact situations, among many other research subjects, like impersonal pronouns or the syntax-phonology interface. Previous to Utrecht, she held positions as full professor at Leiden University (2007–2016) and as post-doctoral research fellow at Cambridge (2005–2007). She earned her PhD at the University of Stuttgart in 2004 with the thesis Impersonal si constructions. Agreement and interpretation.

Martin Hummel: Since 2001 full professor of Romance linguistics at the University of Graz, Martin Hummel obtained his PhD at the University of Marburg, Germany, in 1991 with a thesis on linguistic contributions to cultural studies (published as Cadre, employé und Angestellter. Ein sprachwissenschaftlicher Beitrag zur vergleichenden Kulturforschung im deutsch-französischen Sprachraum der Gegenwart, Tübingen 1993). His research focuses on address, the subjunctive mode in Romance and the adjective/adverb-interface. Previous to his arrival in Graz, Martin Hummel held positions as full professor at the University of Duisburg, Germany (2000–2001) and at the Technical University Dresden, Germany (1998–2000).

David Porcel Bueno: David Porcel Bueno is currently an assistant professor for Romance linguistics at the University of Granada, Spain, where his research is centered on prepositional locutions in Spanish and Portuguese. He is a renowned expert in Ibero-Romance historical linguistics, and his competences also include Arabic and Hebrew, as well as New World varieties of Portuguese. David Porcel Bueno gained his PhD at the University of Valencia in 2015 with a thesis reflecting his current research interests (Variación y fijeza en la fraseología castellana medieval: locuciones prepositivas complejas en la literatura sapiencial castellana (siglos XIII-XV)).

Javier Martín Salcedo: After obtaining his PhD in 2020 at the Federal University of Bahia (UFBA) and the University of Granada (co-tutelle) with a thesis on phraseology and emotions in the language of Brazilian Portuguese and Spanish speaking sex workers (Fraseologia e emoções em corpos estigmatizados: vozes à flor de pele), Javier Martín Salcedo is currently teaching as docente efetivo at the Federal University of Bahía. His research interests also include pragmatics, discourse analysis and language ideology.

"The course topics were all interesting. The fact that the lecturers spoke very passionately about their research topics made every topic even more interesting. It was not at all difficult to follow the presentations. I liked the structure of the course. It was good to get an introduction into the topic first, then learn more about specific topics and in the end do some research on your own. It was an intense week, but it was nice to have the lectures and therefore the different lecturers alternated. I really liked that different languages were used, in the online module as well as during the lectures. The cultural program was nicely chosen. Especially the trip to the countryside was nice since it also involved trying some typical Styrian food."

"It was wonderful dealing with people from other universities, learning from them and making friends from all over the world."

"The Summer School was a very interesting and thought-provoking experience, that I really enjoyed. I especially liked the equilibrium of theory and praxis. Furthermore, I did like that the different course topics were distributed across the different days, so that we had time to process the subject matter. I really appreciated the extra materials we had at our disposition on Moodle. I obviously also enjoyed the different activities outside university. According to me, the size of the group was just perfect, and we all did get along surprisingly well from the first day on. So, that was great! All in all, I definitely did improve my language skills during this Summer School and learned a lot, so I would definitely recommend it and take part again. Thank you for all the work you put into it and your enthusiasm. It was a wonderful experience."

"I loved that we did get the chance to learn more about Portuguese, which is normally a bit underrepresented in comparison to French, Spanish and Italian. The cultural program was a lot of fun. Graz is a beautiful city and we all felt really honored to be invited into the town hall and to be able to take a peek inside. The excursion to the Styrian countryside was also a blast and felt a bit like going on a school trip. The size of the group was ideal, it was big enough to ensure a great deal of diversity and small enough to get the chance to know each other and actually make connections to one another. I will alway remember our week in Graz with fond memories and I think I can speak for all of us, when I say: getting to be part of this program was an unforgettable experience. It was really inspiring to meet so many people from so many countries and different backgrounds, who all share the same love and passion for languages and linguistics." 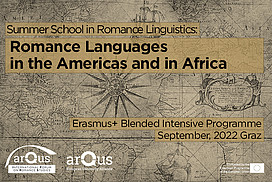