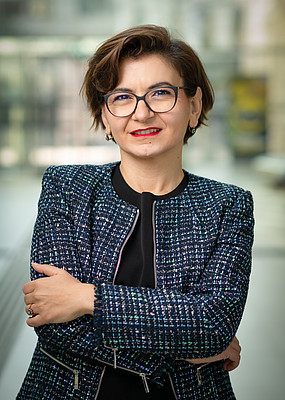 Prof. Dr. Bilgin Ayata joined the Centre for Southeast European Studies at Graz University in October 2020. Previously she was professor for political sociology at the University of Basel. She obtained her PhD at Johns Hopkins University (Baltimore, USA) and her MA degree from York University (Toronto, Canada). Her teaching and research centers on socio-political transformations with a focus on migration, borders, citizenship, affect and emotions, postcolonial studies. Her regional expertise includes Europe and the MENA region. She has published widely on displacement, citizenship, transnationalism, affective politics, memory and violence. ​She is a DFG-Mercator Fellow at the SFB Affective Societies in Berlin (2019-2023); co-speaker of the research cluster migration, borders and mobility within the field of excellence Dimensions of Europeanization; core member of the “Southern Urbanities” Network and co-president of the Research Association Switzerland-Turkey.

Prof. Ayata has received numerous distinctive awards and grants. In 2022, she was awarded by the Nomis Foundation a research project to carry out a comprehensive study on the transformation of contemporary borders with a focus on the external frontiers of the European Union. The project “Elastic Borders: Rethinking the Borders of the 21st Century” comprises an interdisciplinary team of seven doctoral and postdoctoral researchers to examine the movements of retraction and extension of borders enabled through increasingly mobile border practices. Building on the concept of elasticity, this project explores the technological, legal and socio-political dimensions of the elastic border both at a wider EU level as well as in three critical nodes of the EU`s border regime: in Greece (Samos), Spain (Canary Islands) and Tunisia (Medenine).

This research builds on Prof. Ayata`s earlier research project “Infrastructure space and the future of Migration Management: The EU Hotspots in the Mediterranean Borderscape”  (2018-2021) which was funded by the Swiss Network for International Studies (SNIS). It also builds on insights from her earlier research project “Affective Citizenship: Religion, Migration and Belonging in Europe”  (2018-2022) which explored the relationship between religious incorporation and belonging with a study on the recognition of Islam and Alevism in Europe. This project was funded by the Swiss National Science Foundation. A further ongoing research project on emotion and affect in the context of authoritarianism is based at the FU Berlin within  the CRC 1171 “Affective Societies”  at the Freie Universität Berlin where Ayata has been an international collaboration partner since 2015 and DFG Mercator Fellow since 2019. She has received further awards and grants by the MacArthur Foundation, the German Academic Exchange Service, Friedrich-Ebert Stiftung, University of Basel, FU Berlin, Johns Hopkins University and York University.

Prof. Dr. Ayata frequently collaborates with cultural organizations and public institutions for knowledge transfer and exchange beyond academia. In Spring 2019, she has supervised and co-organized the exhibition “Çok Basel - Transnational Memoryscapes Switzerland-Turkey” that explored the relationship of transnational migration and urban memory with a focus on migration from Turkey to Basel, Switzerland. The exhibited work is a result and expression of a transnational dialogue comprising video and audio projects developed by the students of her seminar “Migration and Memory” that took place during the Fall Semester 2018 at the University of Basel. On the occasion of the exhibition by Martha Rosler and Hito Steyerl at the Contemporary Art Museum Basel during the Fall 2018, she co-organized the public lecture series “The Art of Intervention”  in collaboration with the  Kunstmuseum Basel to explore the radical impact and potentiality of art and culture in conjunction with critical thought and political mobilization. In October 2019, the Maxim Gorki Theater in Berlin devoted the 4th Herbstsalon in 2019 to Ayata`s concept on Deheimatization, during which she co-organized a conference bringing scholars and artist together. In the aftermath of the summer of migration in 2015, she organized in 2016 the public lecture series “Topographies of Displacement and Resistance”  at the University of Basel with scholars and activists from the Middle East and Europe.

Currently by Email appointments only, via Skype