Monazite is a REE-bearing phosphate that commonly contains Th and U. Due to the presence of these radioactive elements, monazite can be used as a chronometer of geological processes. The idea is to look at the texture and composition of monazite and describe its relationships with other major and accessory minerals in order to interpret its geochronological record. In Graz, monazite can be analyzed with an electron microprobe or a mass spectrometer.

Metamorphic rocks can be studied from the point of view of structural elements (e.g. lineations, foliations); the superposition of structures gives information on the successive deformation events that affected a litho-tectonic unit. Metamorphic rocks can also be investigated from the petrological point of view; the relationships between major and accessory minerals provide important constraints on the Pressure-Temperature (P-T) path followed by a rock sample. The combination of structural and petrological observations is best achieved at the microscopic scale; thanks to textural relationships it is possible to link P-T conditions with structures of given orientation. This correlation helps interpretating burial and exhumation mechanisms in orogenic systems.

How do minerals behave at high pressure or high temperature conditions ? What kind of reactions take place ? How does the composition of major and accessory minerals evolve ? Can we estimate the age of these high-grade events ?
All these questions are addressed by combining structural, petrological and geochronological observations in high-grade metamorphic rocks (HT in the Ryoke belt, Japan; HP in the Makbal complex, Kyrgyzstan).

Interested in an example ?
Coming soon. In the meantime, take a look at garnet from Kyrgyzstan...

The European Variscan Belt is represented by discontinuous fragments of Paleozoic basement that extend from the Iberian Peninsula to Poland. These fragments are the relicts of a former orogenic system broadly similar to the Himalayas, and their study aims at reconstructing the nature and extent of the orogen.

In the Vosges Mountains (eastern France), a wide range of lithologies appear in the so-called "Klippen Belt". There, it is possible to find serpentinite, gabbro, gneiss and sediments. This association of rocks strongly resembles those oberved in past but also present-day passive margins (e.g. Atlantic Ocean). Gabbroic rocks were dated with the Sm-Nd method and gave a magmatic age of 372 ± 18 Ma. The "Klippen Belt" is therefore interpreted as a remnant of a Devonian oceanic basin that extended to the south of the Vosges Mts. 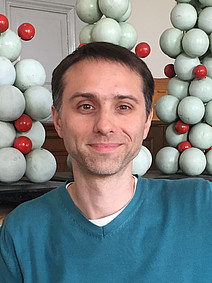