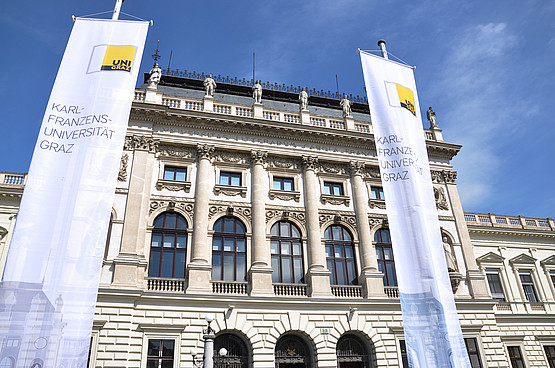 I an interview with REWI, Jürgen Pirker gives an overview of the current activities of the Department of Global Governance..

In February, Jürgen Pirker was elected as Austrian representative to the Council of Europe's Committee of Experts of the European Charter for Regional or Minority Languages. The Charter aims at the protection and promotion languages as part of the cultural heritage, democracy and cultural diversity in the member states. Since 1992, 25 states have ratified the Charter. The Committee of Experts takes part in the monitoring mechanism of the agreement.

Simultaneously, Prof. Klaus Poier (Institute for Public Law and Political Science) was appointed as Austrian expert for the Framework Convention for the Protection of National Minorities. 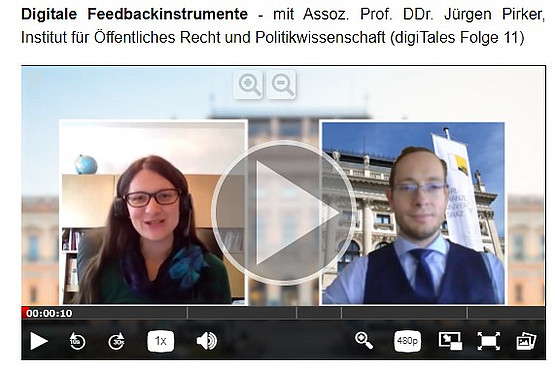 In the "digiTales" discussion series, Jürgen Pirker and Dr.in Simone Adams from the Center for Digital Teaching and Learning discuss the use of digital feedback instruments in teaching. The Center offers numerous resources and services for digital teaching. 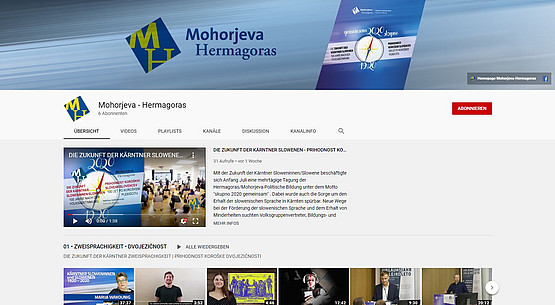 The recording of a conference on "The Future of the Carinthian Slovenes" is now available on Youtube. On the occasion of the 100th anniversary of the Carinthian Plebiscite, experts and representatives from politics and diplomacy focused on the history and future of bilingualism, successful examples of language preservation, open questions of minority protection and perspectives for its further development in Austria and Europe. Jürgen Pirker moderated the first day of the conference and comments on current issues in an accompanying documentation, which was broadcast several times on "Octo" and can also be viewed on youtube.

The complete conference recording can be found: here.

Every year at the beginning of the winter semester, the University of Graz honors outstanding and innovative courses of the previous academic year by awarding its teaching awards. In the 2019/20 academic year, the focus was on the question of how to encourage students to actively think and collaborate. Jürgen Pirker was honored for his course "Constitutional Law and General Theory of the State", which was nominated by students for the award. The eight-member jury selected the course from a total of 32 nominations for the award: "Teaching: Excellent!

Since October 2020 Jürgen Pirker is head of the department "Global Governance" at the Institute for Legal Studies. Further information on the department's initiatives, research and teaching projects can be found on its new website: here. On 10 October Jürgen Pirker presented the book "Problems and Perspectives of the Protection of Ethnic Groups" to the Federal President Alexander Van der Bellen and the President of Slovenia Borut Pahor, as well as to the Ministers Susanne Raab and Helena Jaklitsch and the Governor of Carinthia Peter Kaiser. On this occasion the editors Gerhard Hafner, Karl Hren, Heinrich Neisser, Martin Pandel, Jürgen Pirker, Günther Rautz, Kathrin Stainer-Hämmerle and Martha Stocker were able to present the entire book series "skupno/gemeinsam 2020" to the presidents and ministers: "New and old minorities. Integration, Law and Politics" (2018), "Borders - Separation and Connection 1918-2018 "(2019) and "Problems and Perspectives of the Protection of Ethnic Groups. 100 years after the Carinthian Plebiscite".

Newspaper report (Sonntag) about the 100th anniversary of the Carinthian Plebiscite and the book presentation (German): here. 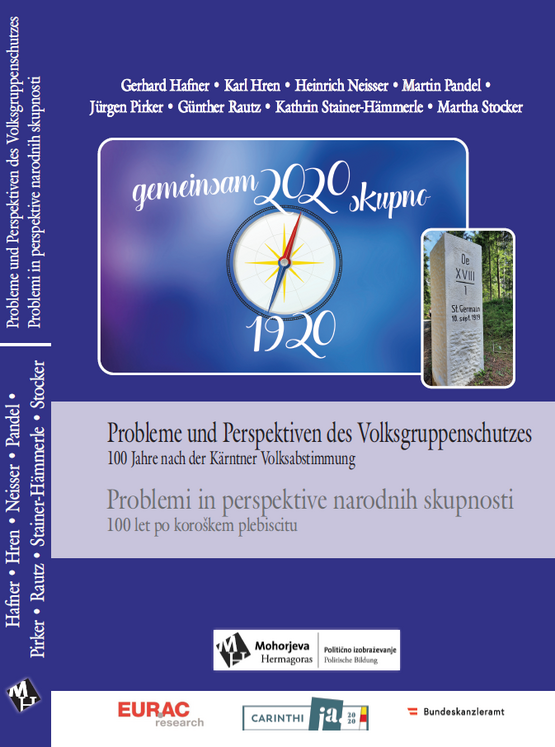 The book "Problems and Perspectives of the Protection of Ethnic Groups" was published on October 10th. It is the result of two conferences on the Legacy of the State Treaty of Saint Germain-en-Laye 1919 (2019) and on the Future of the Carinthian Slovenes (2020). The book includes a DVD with interviews and statements from scholars, politicians and diplomats. A complete recording of the conference on the Future of the Carinthian Slovenes with all contributions will be available online (free of charge) soon.

On 24 September 2020, Jürgen Pirker gave a speach about political and consitutional changes in the context of 10 October 1920 and their consequencesat the symposium "Work and Democracy" of the Carinthian Chamber of Labour. 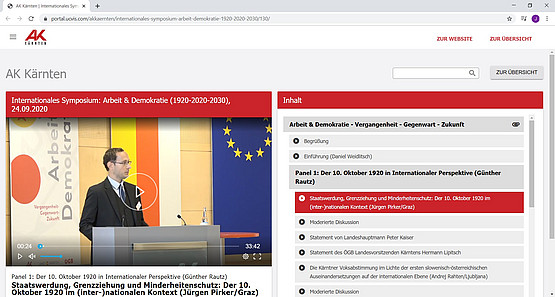 The ethnic conflict has shaped Carinthia's recent history. The legacy of the past casts its shadow on the coexistence between the majority population and the ethnic group. At the same time, globalization, Europeanization, re-nationalization, migration or the emigration of members of ethnic groups pose new challenges for the protection of cultural diversity. 100 years after the Carinthian referendum, a conference from July, 2nd to July, 4th dealt not (only) with the past, but with the future: It was dedicated to dealing with the past and with old and new diversity, examined successful instruments of language preservation, necessary further developments of ethnic group law and the role of the diaspora in questions of minority protection / for the ethnic group. 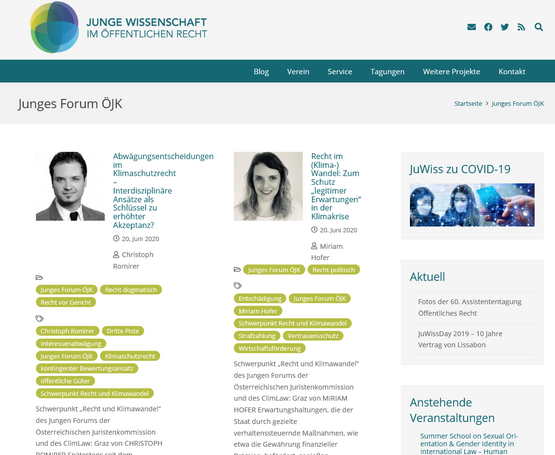 Climate change poses many challenges to the law. On the occasion of the opening conference of ClimLaw: Graz (Research Center for Climate Law) in June 2020 at the University of Graz, the Junge Forum der Österreichischen Juristenkommission in cooperation with ClimLaw: Graz has designed a JuWiss-focus week. The various contributions illuminate the complex topic of "Law and Climate Change" from a variety of perspectives.

The contributions - and all other texts of the Young Forum ÖJK - can be read on the Juwiss-Blog. They can be found: here. 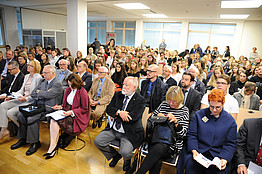 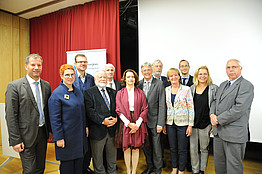 In October, a conference on the occasion of the 100th anniversary of the signing of the State Treaty of Saint Germain in 1919 will dealt with the legacy of this treaty and focused on current challenges in the protection of minorities: How do the 1919 peace treaties fit into the system of international relations that prevailed at the time? What is their legacy for the protection of minorities and how can this be further developed in the 21st century? What what role does Europe - in the form of the European Union or the Council of Europe - play in dealing with ethnic or linguistic minorities?

At the annual conference of the Austrian Commission of Jurists Jürgen Pirker spoke about "Power and Violence in a theoretical Perspective" focussing on the state and the family.

On May 2nd, Juergen Pirker gave a talk at the University of Minnesota on "Memory Politics and Minority Rights in Central Europe (1867-2019)". Presented by the Center for Austrian Studies and the Department for History.

On May 14th, Juergen Pirker spoke about "Minority Rights and Dialogue: From Ethnic Conflict towards a Peace Region Alps Adria" at the Conflict Resolution Institute of the University of Denver. 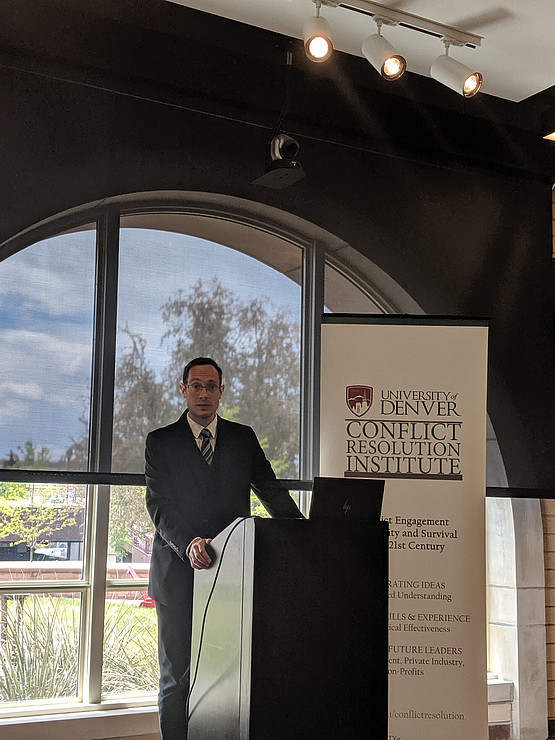 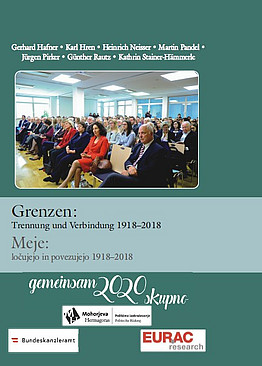 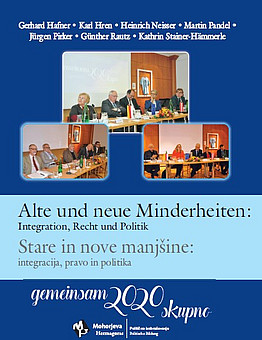 From January to June 2019 Dr. Pirker is going to teach at the University of Minnesota (USA). The main topic of his teaching will be "Europe's Contested Borders, (Nation-)States and Peoples: Austria, the Alps and the Adriatic". 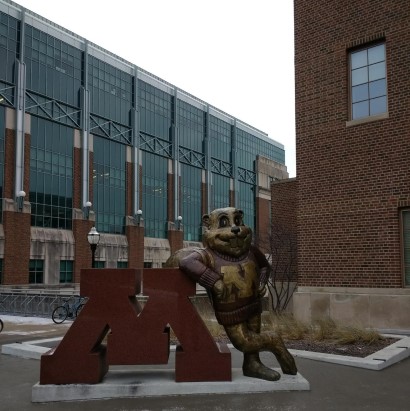 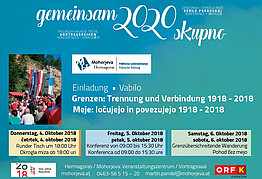 From 4 to 6 October, a conference within the series "gemeinsam/skupno 2020" was devoted to the topic of borders and border demarcations from the perspective of history, law and politics. The conference began on 4 October with a Round Table on "Border Experiences" and concluded on 6 October with a cross-border walk in Leifling/Libelice (A/SLO). At its core was the illumination of the historical border-finding processes of 1918 and their consequences from the perspective of law and political science.

Borders separate and connect, geographically and mentally. The borders drawn after the First World War separated "peoples" and populations and promoted nationalism, which experienced its most aggressive forms in the 20th century. The European Union has set out as a "peace project" to overcome borders that have recently been closed again in response to the migration and refugee crisis - in real terms and in people's minds. The anniversary of the Carinthian referendum provides an opportunity to deal with the consequences of border demarcations, their overcoming and the potential of border areas from an interdisciplinary perspective within the framework of the conference series 2018 to 2020.

Article by Jürgen Pirker in the Bulletin of the Carinthian Historical Society: "The Spirit of History(s): October 10 in Historical Memory and Political Education" (German). 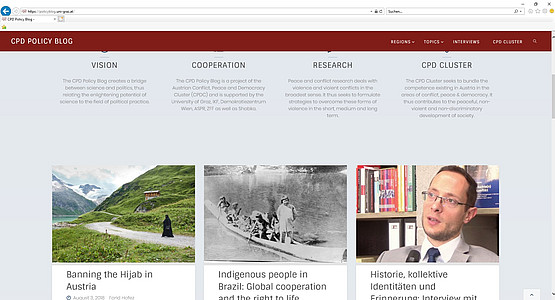 In an interview with the CPD Policy Blog Jürgen Pirker explains the effects of narratives in civil conflict transformation. He refers to his publication "History/ies in Conflict: On the Interactions of Stories, Law and Politics" (German).

On September 19th the Young Forum OeJK will host an event dealing with the challenges of legal education. Structural issues of legal studies will be discussed by experts and members of the Young Forum, focusing on requirements defined by science and legal practice.

The Young Forum OeJK contributed to the Conference of the Austrian Commission of Jurists from 31.5.-2.6. on "Data Protection and Privacy" (Programm) with a speech on an international agreement for the regulation of public observation by Dr. Oskar Gstrein (Gröningen). Additionally, the Young Forum published several articles on current issues of data protection on the Juwiss Blog for Young Science in Public Law.

At the Faculty of Law, Ambassador Dr. Valentin Inzko, High Representative for Bosnia and Herzegovina, und Dr. Marjan Sturm, President of the Zveza slovenskih organizacij na Koroškem, gave a speech on challenges of dialogue and reconciliation in Carinthia, Slovenia and Bosnia. Afterwards, Prof. Helmut Konrad, Prof. Joseph Marko and Ass-Prof. Jürgen Pirker discussed issues of dealing with troubled past and the "management" of interethnic-conflict through law and politics. 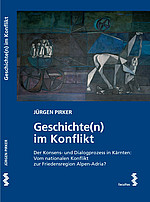 On Mai, 8th and 15th, the  book by Juergen Pirker on "History/ies in Conflict: The Consensus- and Dialogue Process in Carinthia: from National Conflict towards a Peace Region Alps-Adria" will be presented and discussed at the University of Klagenfurt and University of Graz.

Invitation and program of the event at University of Graz (May 15th, Sitzungszimmer der Rechtswissenschaftlichen Fakultät, RESOWI Zentrum, SZ 15.21, 17.30): Book presentation, with Statements of Dr. Valentin Inzko, High Representative of Bosnia and Herzegowina, and Dr. Marjan Sturm, followed by a discussion with Univ-Prof. Dr. Dr. hc Helmut Konrad, Univ.-Prof. Dr. Joseph Marko and Ass-Prof. DDr. Jürgen Pirker about History, Law and Politics in Complex Conflicts and within the Centenary of the Founding of the Republic of Austria in 2018. Moderation: Ao. Univ.-Prof. Dr. Anita Ziegerhofer and Ass.-Prof. Dr. Benedikt Harzl.

On Friday, October 6th 2017, an interdisciplinary conference dealt with "New and Old Minorities: Integration, Law and Politics" and specifically deal with the functions of "classical" instruments of minority protection and the challenges caused by migration for the effective minority protection in ever more pluralistic societies.

Information about the Conference Series: here.

Statement of the Carinthian Government: here.

In an interview with the Austrian daily newspaper "Die Presse" Dr. Pirker elaborates core arguments of his book "Minority Protection and Language Promotion" (2017, Böhlau Publisher): "Legal research demonstrates how minorities might be more effectively protected in Carinthia and South Tyrol and how language can build bridges: Therefore, language promotion is essential.", the interviewer, Dr. Posch, summarizes. 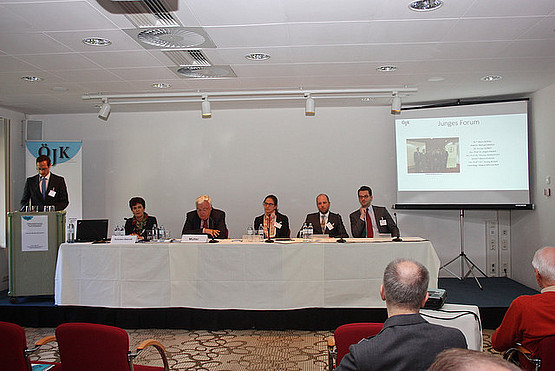 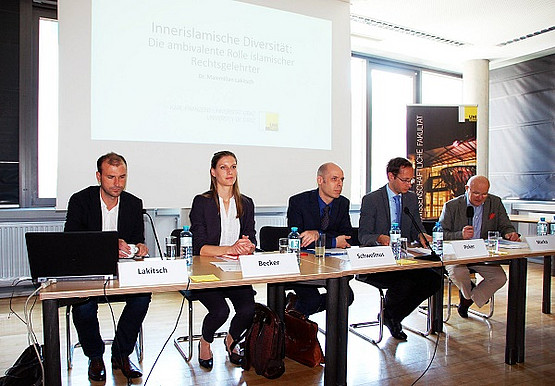 On May 23rd, Juergen Pirker participated in a Panel on Diversity Governance in a conference on "Islam, Law and Diversity". 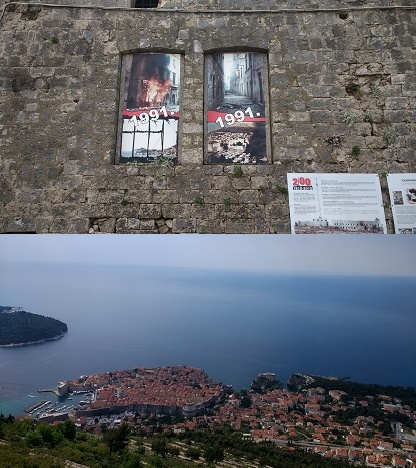 At the Interuniversity Center in Dubrovnik Dr. Pirker participated in a course on Divided Societies. The 20th turn of the international lecture was dedicated to "Memory Wars". 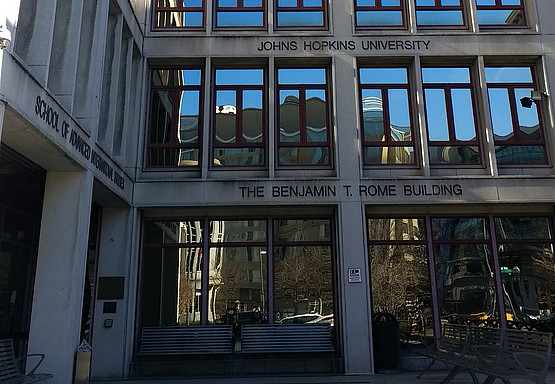 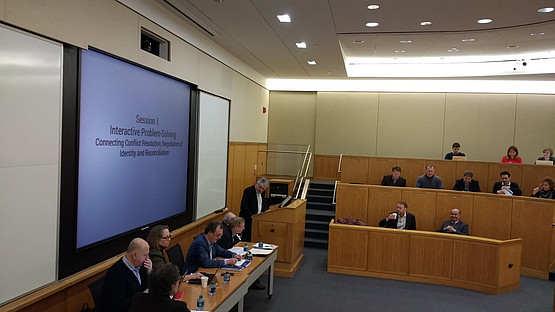 From March 16th to 18th the third conference within the series "The Transformation of Intractable Conflicts" took place at the Weatherhead Center, Harvard University. Jürgen Pirker chaired a panel on "Interactice Conflict Resolution and Releated Approaches". The conference was organized by the Herbert C Kelman Institute, the Harvard Weatherhead Center for International Affairs and the Universities of Graz and Klagenfurt. It was an initiative of the Kelman Network and was dedicated to the 90th Birthday of Prof. Herbert C Kelman.

In February and March 2017 Dr. Pirker gave a two weeks-course on "Rule of Law in Austria, Germany and the Europen Context" at Nanjing University, China.

For more Information about the German-Sino Institute of the Universities Göttingen and Nanjing click here. 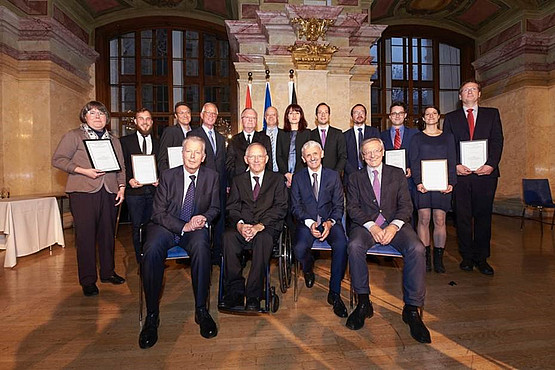 In November 2016, Dr. Pirker was awarded a "Leopold Kunschak Award for Science" for his thesis on Minority Protection and Language Promotion. The "Gand Honorary Award" was given to the German Federal Minister of Finance, Dr. Wolfgang Schäuble. The Prices were awarded by the Austrian Vice Chancellor, Dr. Reinhold Mitterlehner. 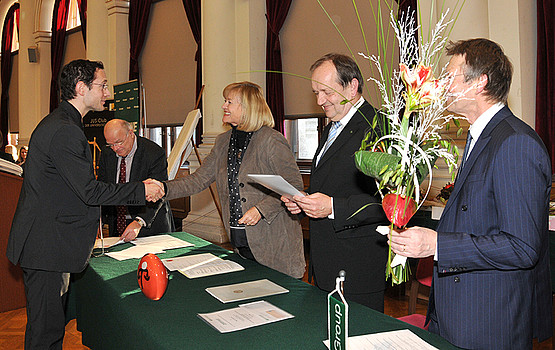 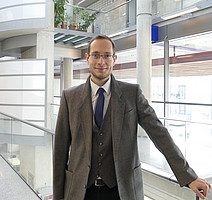