Karst aquifers develop where the dissolution of soluble rocks causes a widening of fractures, thus creating highly conductive solution conduits. Flow velocities in conduits are high and thus residence times of solutes injected into sinkholes or swallets typically short, often in the order of days for transport distances of several kilometres. As a consequence, point-source contaminations may pose serious threads to drinking water supplies relying on karst spring waters. Despite the rapid transport through solution conduits, diffuse-source contaminants such as pesticides are found to be highly persistent in karst aquifers. Long residence times in the order of years are also inferred from the interpretation of environmental tracer data. Conceptually, karst aquifers consist of a low-permeability matrix/fracture porosity, which provides the majority of storage, as opposed to the much more permeable conduit porosity, which makes up only a small percentage of the total porosity. Following this conceptual model, residence times within the matrix/fracture porosity will be much higher than those in the conduit system. This project thus was aimed at providing fundamental knowledge about the porosity development and the resulting porosity distribution in soluble rocks as well as its consequences for the transport properties of the aquifers. The development of the conduit porosity was examined by modelling the dissolutional widening of discrete pathways (e.g., Hubinger and Birk 2011). The resulting generic aquifer models were then used for studying the transport behaviour of solutes (e.g., Hubinger and Birk 2010). Thus, transport characteristics were considered as imprint of karst evolution to identify general interrelations between (hydro-)geologic factors governing karst evolution, the resulting porosity distribution, and its implications for the residence time distribution of point-source and diffuse-source contaminants.

Example of an evolving conduit pattern

This project was funded by the Austrian Science Fund (FWF): P20014-N10 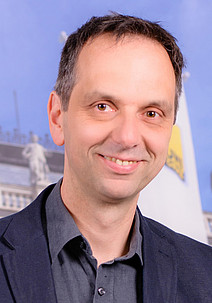